US author Corban Addison recently travelled to Gabon, West Africa, to undertake research for a new novel. Corban trekked through Moukalaba Doudou National Park with three guides - you can read more about his research here.  He was inspired by their charisma and the tales they told of their adventures. Corban asked whether he could share their stories with us: 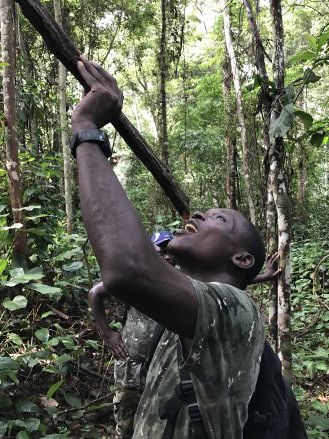 Ghislain is in his late thirties, as imposingly tall as he is reed-thin, with skin as dark as polished teak and the watchful eyes of a bird of prey, yet softened around the edges by his ready smile. When he greets me at the bush taxi station, I am impressed by his studious command of English. “I learned it in school,” he tells me when I ask, which understates the achievement. In my ten days in Gabon, he is the only person I meet who speaks more than a handful of words in English. Everyone else speaks only French and native dialects.

Ghislain has been an eco-guide in the Gabonese forests for over a decade, since Gabon’s president set aside some of the country’s most pristine territory for state protection. For most of Ghislain’s tenure, Moukalaba Doudou National Park has been his domain. He leads at least two trips a month into the rainforest—“expeditions,” he calls them—sometimes with naturalist from overseas, and other times with travelers like me who have wandered far off the beaten path to see what cannot be seen anywhere else on earth.

Before our first trek through the forest, he offers me a nugget of wisdom, or is it a warning? “Out here, you have to go with nature. You can’t come to the forest with a plan. The sounds, the animal signs, we follow wherever they lead. Leave everything else behind.”

It is sage advice, for the forest quickly swallows us whole, ushering us into a wilderness that most people only read about in history books, a dappled landscape roamed by gorillas and elephants and leopards and countless other creatures large and small, almost all of them hidden, and populated by such a density and diversity of flora that around every bend the forest seems to display a new face, green upon green in ten thousand shades.

We spend five days together, trekking through the bush by day and talking by the light of kerosene lamps by night. Ghislain tells me many stories from his adventures as a guide, but one of them, in particular, bespeaks the paradoxical audacity and humility of his work. Not long ago, he led an expedition with a South African naturalist to tag elephants for tracking purposes. Finding the elephants and tranquilizing them was the easy part, especially with the help of Pygmy guides the naturalist had brought along. The hard part was getting away safely after securing the tracking devices and administering the fast-acting antidote.

Of all the animals of the rainforest, the elephants are the most confrontational. Even the Pygmies—perhaps the truest denizens of the African wilderness—are afraid of them, knowing well their tendency to charge an intruder. But on this day, in their woozy confusion after having been drugged and collared, the elephants were incandescent with rage. One of them, a female, caught Ghislain’s scent and tracked him down mercilessly, using her trunk and great weight to shake the tree he had climbed to escape her wrath. He came close to falling, but held fast to a vine and maintained his footing. Even after years of working in the forest, the incident left him shaking with terror. 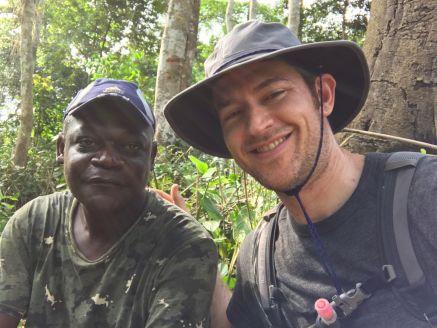 Jean Louis is forty years old and hails from a small village in the southern part of Gabon. He is a couple of hands shorter than Ghislain, and his build more muscular than the English-speaking guide. His French is soft-spoken and gentle, as if he prefers to conserve his words, yet his coal dark eyes, as round as river stones, miss nothing.

The forest has been sacred to him since he was a boy. His father, a traditional healer, knew its secrets and shared them with Jean Louis from an early age. Together, they would venture into the wilderness to study the medicinal properties of plants and trees, roots and berries. On those trips, Jean Louis learned how to distinguish the calls of birds from those of animals, how to track gorillas by their scent, their dung, and the three-knuckled handprints and human-like footprints, and how to avoid the snakes that hide in the leaves on the forest floor.

When Jean Louis was in his early twenties, he took a job with a logging company that harvested the old-growth trees in parts of what is now Moukalaba Doudou National Park. In those days, he learned to navigate the forests the way a city dweller masters an urban environment. When the park opened, the government hired him as one of its first guides. Many of the trails that exist today he carved with his own machete.

On my expedition, Jean Louis trades duties with Paul, another French-speaking guide, as my principal tracker in the rainforest. When Jean Louis is in the lead, he hacks through the undergrowth with a single-minded intensity, as if he knows exactly where he is going, which is curious because we have no objective other than to see what the forest reveals to us. Once, when we are sitting on a log snacking on a banana, I ask him whether, if I led him into the forest blindfolded and deposited him in some random place, he could find his way home? He glanced down modestly. “Oui,” he said softly.

It is this answer that keeps returning to me as he leads me through the gathering dark of early evening toward Mbani camp, an outpost so far off the grid that even Ghislain admits it is in the middle of nowhere. At one point, he steps over a leaf pile scattered between tree roots and says in a thick accent, “Snake,” before turning nonchalantly and marching on. I study the mottled ground, thinking that the red-brown leaves bear a resemblance to the coloration of the infamous Gabon viper, but I see no serpent, no movement, nothing to indicate a living presence. I take a giant cautionary leap over the leaf pile and land safely on the other side. Heart pounding, I follow Jean Louis deeper into the bush.

That night over dinner, I ask him to regale us with a story. He thinks for a moment, then recounts the day he was nearly attacked by a pair of gorillas. He and a client were walking through the forest when he happened across a baby gorilla stranded in a tree. Suddenly, two male gorillas—“silverbacks”—appeared out of the bush and raced toward them, screaming with a ferocity that shook the forest. Jean Louis stopped moving and averted his eyes, as one is taught to do when confronted by a gorilla, yet his attempt to mollify the silverbacks had no effect, for he stood between them and their baby.

It was then that he remembered the machete in his hand. Tossing conventional wisdom to the wind, he raised the blade overhead and brought it down on a branch beside him in full view of the gorillas. The wood split cleanly, and the heavy branch fell away. The silverbacks continued their Orc-like howling, but Jean Louis could tell they were paying attention. He hacked off another branch, showing them the prowess of the blade. Seconds passed as the gorillas pondered this, then drew the analogy Jean Louis intended and backed away, allowing him and his client to escape unharmed. 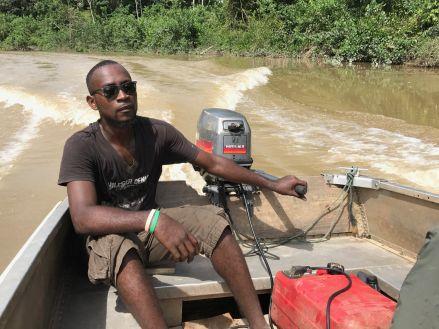 Paul is a thirty-something guide from Doussala, the village of just over forty inhabitants that sits at the remote entrance to the Moukalaba Doudou National Park. Wiry in form with chiseled features that remind me vaguely of Chris Rock, he exudes an unsubtle confidence that belies the diffidence he displayed when we first met. Perhaps it is the language barrier, but in the presence of Jean Louis and Ghislain, he is quite voluble, a natural raconteur. It takes a few days of tromping through the forest together before I coax him to let down his guard, but when he does, it is obvious that he enjoys the spotlight.

Like Jean Louis, he first ventured into the forest as a child, learning its many sounds and shapes and moods with the other children in the village. After finishing his schooling, he took a job with a Japanese botanist who had come to the area to catalogue the many species of flora. (The Japanese have been the park’s steadiest international benefactors.) Years later, he transitioned to a gorilla habituation project run by the government whose mission it was to identify and track the gorilla groups in a section of the forest.

One of his tasks in this capacity was to set up camera traps for the animals. The cameras were fitted with motion sensors that started recording when something large enough wandered by. Unfortunately, the glow of the red power indicator irritated many of the animals, giving rise to hilarious footage of elephants stomping on the cameras and chimpanzees beating them with sticks in an attempt to disable the light.

At one point, however, Paul’s team captured something extraordinary in the lens—an animal that none of the naturalists could identify. They sent the footage overseas for a second opinion, but none of the experts they consulted had ever seen it before. To this day, the animal remains a mystery, proving that even in 2017 there are creatures out there in the deepest jungles of Africa whose existence is unknown to us. It is people who speak the language of the forest and know its ways, people like Paul and Jean Louis and Ghislain, who are most likely to discover them.