Where best to find adventure? In a culture unlike your own…

In this exclusive diary, Matt Di Paoli waxes lyrical on his trip to Tokyo and Osaka, and shares what he learnt from his experiences there.

WHO IS MATT? In 2017, the Best Unpublished Manuscript in our Adventure Writing Prize was awarded to New York native, Matt Di Paoli. His winning entry, Holliday, follows the journey of infamous 19th century gambler, gunslinger and dentist from the American mid-west, Doc Holliday.

Osaka has grime. It has litter in the streets, art, graffiti, style, it’s everything I’ve been hoping for in Japan. It feels ebullient, sinewy like tendon cubes, block long neon signage by the river, The Running Man and the famous mechanical crab. The drinks are cheap and the fried food is greasy. This is my kind of town.

Japan is a nation caught in a time loop back to the 90s—everything would be sterling and modern if we were all in a line about to see Jurassic Park, but instead it seems to be lost somewhere behind the internet age. Boxy, metallic subway machines line the metro with small, confusing, worn red buttons. There are decade old cars, retro games and the type of large electronic stores that died out in America years ago. It’s shockingly analog in a world that has left the tangible behind. As a lover of retro gaming, 90s style, and classic cinema, Osaka and Japan in general feel like a throwback to my teenage years.

I caught a teenager using a flip phone on his skateboard, cruising in Americatown in his aviators. It’s charming, but for a Mecca of gaming and electronics, it’s shocking that Japan has fallen so far behind.

In Osaka, I found a true bar scene, lots of small fried foods on a stick called Kushikatsu, that reminded me of fairs as a kid, holding my dad’s large hand, passing up corn dogs for funnel cake. They have a giant ferris wheel to boot, like some American’s nostalgia dream.

Every Japanese sign has a mistranslated English counterpart - like the hose in the monkey garden by the zen temple that read: “Use Prohibition.” Or the warning of” “No Photograph. No Bringing.” I have, I must admit, been guilty of bringing from time to time.

They revere American culture but it is not the culture of today. They use English everywhere but it’s not our English and they can’t speak it. It’s lingual purgatory, a land that invites and keeps you at arm’s length. Once again, I am within and without.

At 6:15 I received an email that I was fifteen minutes late to Bar Yasuda and what happened next was pure panic. I slammed down the strange pâté I was eating at my mediocre hotel bar, plucked out 20,000 yen, left it on the table, and headed to find a cab. The waiter, as I was about to drive away, ran up to me and returned a Polaroid camera, which was not mine.

I was nervous on the drive, thinking I’d ruined the pre-eminent Japanese food experience I’d been so eager for. Days are not days here. In America it might still be Easter. It’s strange to live in the future, cast out ahead of our lives, eating sea urchin that hasn’t even been caught yet, drinking electric blue cocktails out of light bulbs and talking to someone’s hero.

I texted them furiously, shame-faced, asking them if it was still OK to come. I got to the Michelin-starred restaurant at 6:40, but Yasuda couldn’t have been kinder about it. I sat down. The waiter took my drink order and handed me a burning hot towel.

I watched him for some time before I brought up the courage to speak. I’d seen him on Bourdain, done research on him, anticipated this moment.

“How is your transition back to Japan?” I finally asked him.

This piqued his interest. His eyes light up when he can talk about his craft and his restaurant. “I wanted to start over where sushi was born. I lived in Astoria. I loved it there. But home is a place we cannot manufacture. Home is comfort.”

“Yes. Good fish! But the key is the rice. Short grain, medium rice.” He laughed then sliced and patted a piece of big eye tuna on a little egg of white rice that he’d pulled from his basket and brushed it with a veil of soy sauce.

I ate it greedily with my fingers, tasting all the vinegar on the rice, the fat of the fish.

Yasuda is a master. His hands are thick and his fingers are muscled from martial arts, and when he makes a piece of sushi you taste his whole being inside of it.

Electric Town – a melding of nostalgia otaku and kink. It’s a nerd’s paradise, an unadulterated thirteen-year-old fever dream. Seven floor sex shops, skyscraper arcades, and those little claw machines that are rigged as all hell. Twenty dollars and no weird stuffed animé tiger? How is this possible?

Entering legendary videogame store “Super Potato” was like stepping into a rotary phone. I felt completely transported back to the 90s, suddenly re-enraptured with Final Fantasy characters that I haven’t thought about in years. The tinny gamer music that once got turned into drum and bass pings in the background as I play Altered Beast and the green werewolf on the screen is an exact representation of how I feel in this moment — out of place, gorged with delight, and unrealistic.

This is the place I’ve dreamed of. It is unabashedly nerdy and unapologetic which is a mixture that doesn’t exist in the States. Sexy maids stand on the street corners trying to rope you into their cafes. What are they saying to me? Is it flirtation? Is it like selling a used car? I’ll never know. It’s completely in my own imagination and I want to keep it there.

It starts with sandalwood. The whole town smells of sandalwood and cigarettes. It’s a comforting smell, like sneaking into a bar at seventeen. I remember the round tables, Bob Dylan in the background, how exciting it was, and Becky Friedman telling me I seemed like a Jack Daniels guy. I became that guy for a very long time. In some ways I’m still that guy.

The day began with eating strange Dean and Deluca muffins in a large square blaring Japanese boy bands from an oversized screen. Everyone here is silent, even during rush hour. You can hear yourself walk. You can hear rubber on cement, without honking, without the crush of flesh. It’s crowded but it’s civilized, like being hanged with a silk scarf.

Tokyo is enormous, so to see the cherry blossoms at full bloom I took the metro to Ueno park where locals reserve plots of land on blue tarps under the blossom trees and drink dry beer and watch the tourists sway by. Every drink has a flavor here. I love that about Tokyo.

After Ueno, I tried to get into the Kawaii Monster Café a couple of times, but the line was too long and a man in a blue uniform was yelling things I couldn’t understand so I left and got a drink by the strange reflection mall and watched people go by.

After, I went to a spot where they let you cook your own food and I was surprisingly good at it. I enjoyed spreading the oil on the grill, raking it, scraping the black metal. Shrimp, pork, squid, egg, chopped seaweed, delicious. It tasted like an omelet straight from the bird’s loin.

At night, I found Bar Albatross, a singular spot in Golden Gai, a network of tiny bars, and sat on the second floor and drank rare whisky created by or named after Ichiro Suzuki, the famed baseball player, and I talked to a couple of Americans waiting for a woman to come. One of them kept showing me pictures of her and asking me to confirm that she was, in fact, a woman.

We’re all just looking for confirmation of what we already want to know.

When she showed up, she was pretty, broad shoulders, lips like earthworms.
I hope he finds love, for all our sakes.

Tokyo is like the first moment you open a bag of chips. It’s a smell you didn’t expect, like if you could barbeque the sea; it’s delicious and overwhelming at once.

The mass of pedestrians is shocking, people everywhere, deep throated birds cawing in the morning mist, and the city does not stop. About ten percent of people wear those strange surgical masks, some are fashionable, black or patterned, most are white. Why do they wear them? Sometimes you’ll see a couple holding hands, woman with a mask man with none. Does that isolate them? Does it make them free? I haven’t seen a single couple kiss since I’ve been here; maybe it’s rude. 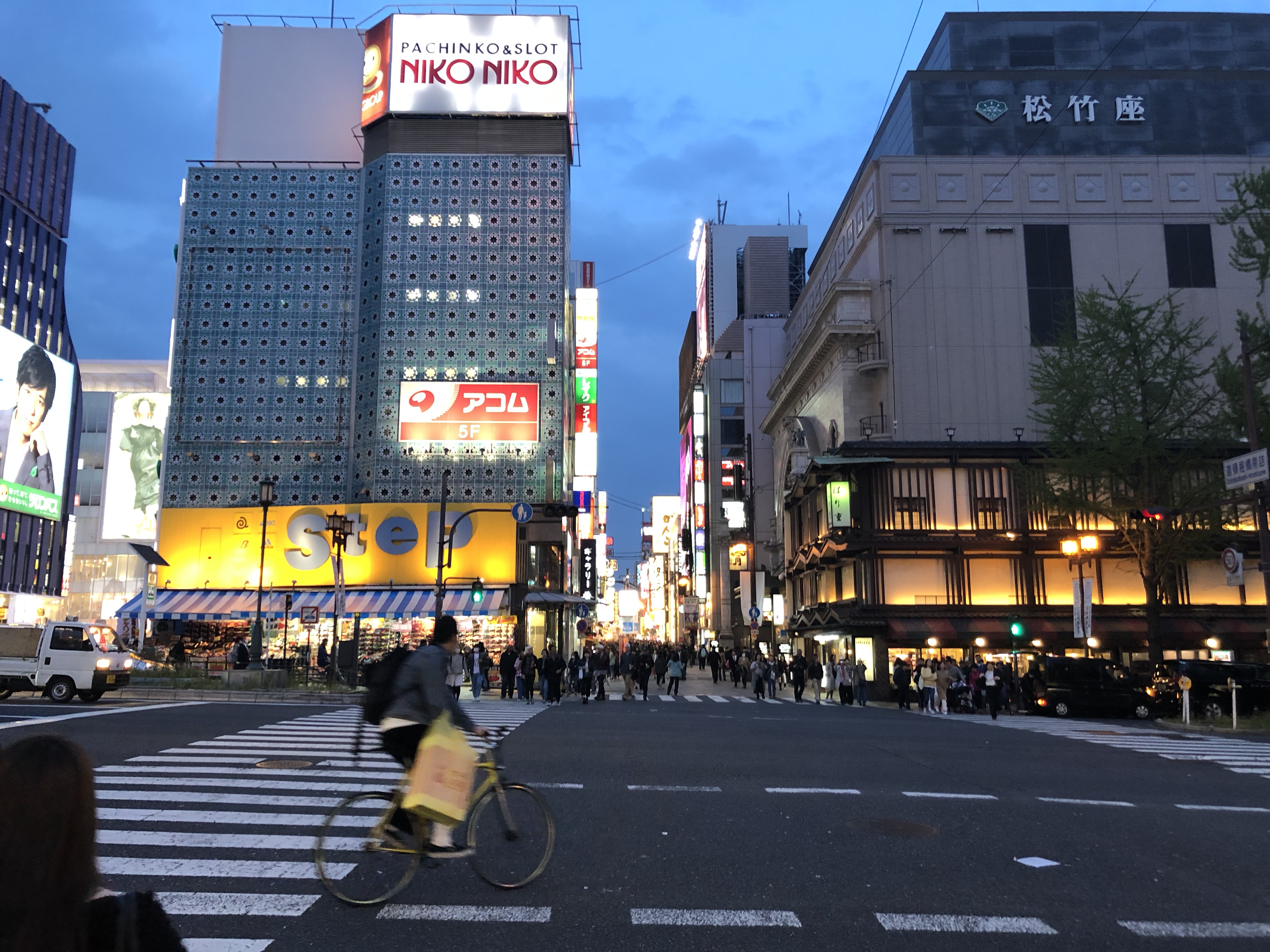 Everyone is so well behaved, everyone but me. I started the night with three different kinds of Japanese beer, octopus salad, pickles, then Suntory whisky which I’d always wanted to try ever since seeing Bill Murray hock it in Lost in Translation and then izakaya: Kobe beef, sardines, pork shoulder, cold soba noodles, ramekins of sake, more beer, and then bar hopping around with some Jameson sodas and good company. The restaurant was on the ninth floor of a nondescript building.

Everything is bespoke here, and it’s not even trying to be. It’s a hipster’s dream.

I’m a day in the future and I don’t think the world misses me back home, they are happy I’ve finally found peace, out here in the land after time. Today, I will see the cherry blossoms. They’re about to wilt, my German-Japanese friend told me. Go now or don’t go at all. So I will.

It was strange to sleep, after going so long without it. Maybe I’ll try it again some time.